Back to Discussion Back to Blog

Erectile dysfunction (ED), also known as impotence, is a type of sexual dysfunction characterized by the inability to develop or maintain an erection of the penis during sexual activity. Erectile dysfunction can have psychological consequences as it can be tied to relationship difficulties and self-image.
A physical cause can be identified in about 80% of cases.These include cardiovascular disease, diabetes mellitus, neurological problems such as following prostatectomy, hypogonadism, and drug side effects. Psychological impotence is where erection or penetration fails due to thoughts or feelings; this is somewhat less frequent, in the order of about 10% of cases.In psychological impotence, there is a strong response to placebo treatment.
Treatment involves addressing the underlying causes, lifestyle modifications, and addressing psychosocial issues. In many cases, a trial of pharmacological therapy with a PDE5 inhibitor, such as sildenafil, can be attempted. In some cases, treatment can involve inserting prostaglandin pellets into the urethra, injecting smooth muscle relaxants and vasodilators into the penis, a penile prosthesis, a penis pump, or vascular reconstructive surgery. It is the most common sexual problem in men. 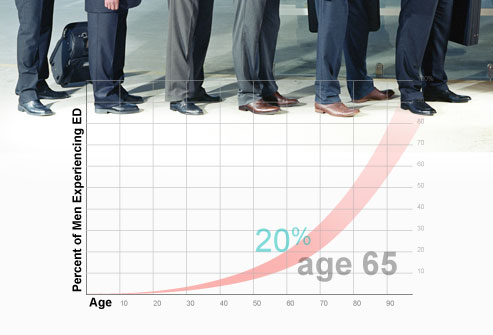 Sexual dysfunction and ED become more common as men age. The percentage of complete ED increases from 5% to 15% as age increases from 40 to 70 years. But this does not mean growing older is the end of your sex life. ED can be treated at any age. Also, ED may be more common in Hispanic men and in those with a history of diabetes, obesity, smoking, and hypertension. Research shows that African-American men sought medical care for ED twice the rate of other racial groups.


The Mechanics of ED 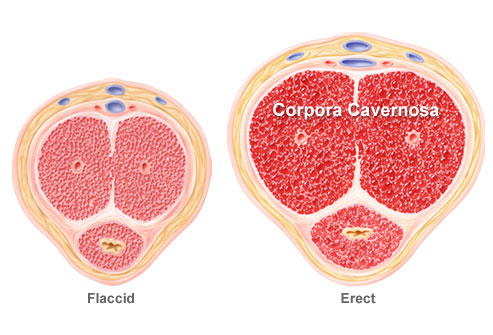 An erection occurs when blood fills two chambers known as the corpora cavernosa. This causes the penis to expand and stiffen, much like a balloon as it is filled with air. The process is triggered by impulses from the brain and genital nerves. Anything that blocks these impulses or restricts blood flow to the penis can result in ED. 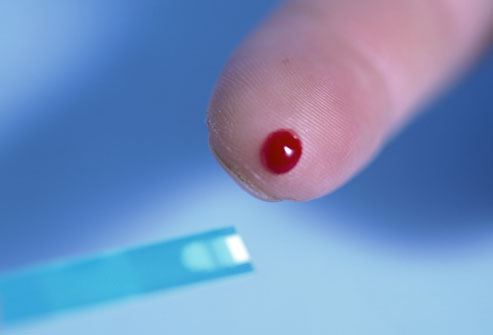 The link between chronic disease and ED is most striking for diabetes. Men who have diabetes are two to three times more likely to have erectile dysfunction than men who do not have diabetes. Among men with erectile dysfunction, those with diabetes may experience the problem as much as 10 to 15 years earlier than men without diabetes. Yet evidence shows that good blood sugar control can minimize this risk. Other conditions that may cause ED include cardiovascular disease, atherosclerosis (hardening of the arteries), kidney disease, and multiple sclerosis. These illnesses can impair blood flow or nerve impulses throughout the body. 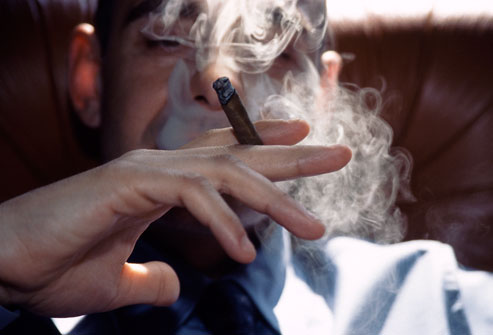 Lifestyle choices that impair blood circulation can contribute to ED. Smoking, excessive drinking, and drug abuse may damage the blood vessels and reduce blood flow to the penis. Smoking makes men with atherosclerosis particularly vulnerable to ED. Being overweight and getting too little exercise also contribute to ED. Studies indicate that men who exercise regularly have a lower risk of ED. 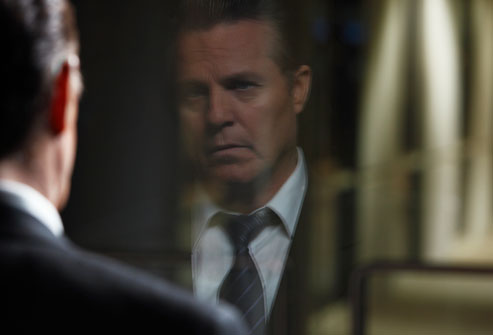 ED usually has something physical behind it, particularly in older men. But psychological factors can be a factor in many cases of ED. Experts say stress, depression, poor self-esteem, and performance anxiety can short-circuit the process that leads to an erection. These factors can also make the problem worse in men whose ED stems from something physical.